A diving pool with a 4m platform 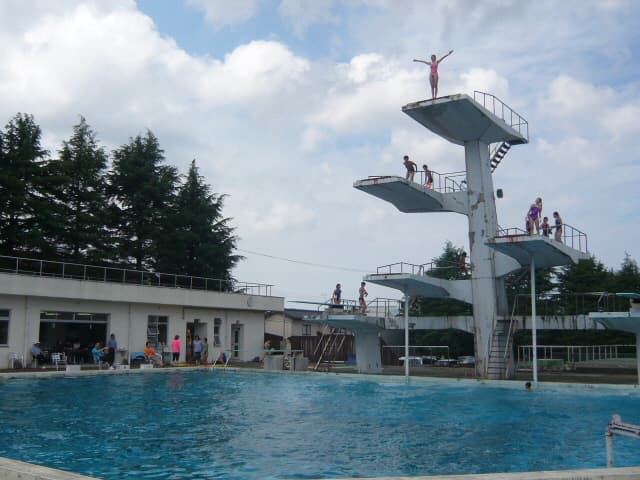 The former Multidiscipline Municipal Kanazawa Pool (Togashi district) had to be regrettably closed due to aging. During its long run, the pool saw many an athlete born, and hosted many regional competitions from the Hoku-Shin-Etsu area (Fukui, Ishikawa, Toyama, Nagano and Niigata prefectures) as well as national competitions such as the National High School Championship (1961), the National Middle School Swimming Competition (1971), the Inter High School Championship (1985) or the Ishikawa National Sports Festival (1991) among others.The pool, which closed in 2016, was put under the spotlight as the oldest diving pool still in use at the time, and was also chosen as filming location for the 2008 movie “DIVE!!”.Worth noting is the 4m diving platform that complemented the usual 10m, 7.5m and 5m platforms. The 4m platform was a very rare installation, in Japan and abroad. 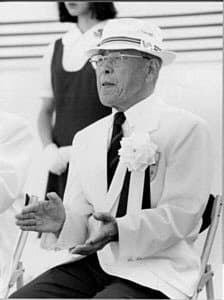 Shuzo Nakata, who was from Kanazawa, gave its foundation to Japanese diving and nurtured 7 Olympic athletes, was the one who initiated the 4 m diving platform. Thanks to Mr. Nakata’s groundbreaking idea of constructing a 4m platform, Ishikawa local athletes could engage in an effective basics training, leading to many awards in national competitions. It is not too much to say that this platform has contributed to build the foundations of “Ishikawa, the Diving Kingdom”.To amplify Mr. Nakata’s accomplishments, the “1st Shuzo Nakata Cup, Diving Competition” was held in 2018. (Organizers: Ishikawa Prefectural Swimming Association, Shuzo Nakata Cup Diving Competition Executive Committee)

Shuzo Nakata
Born in 1911 in Kanazawa. Graduating from the Ishikawa Prefectural Kanazawa Industrial Design High School (Now Ishikawa Technical Senior High School) and the Japan Physical Education Professional School (Now Nippon Sport Science University), he then won the diving competition of the Ishikawa National Sports Festival in 1947. After that, he became a high school teacher and engaged in coaching diving, thus nurturing the following 7 Olympic athletes: Tsuneo Shibahara (4th in the Berlin Olympics), Masami Miyamoto（Yano）(Helsinki Olympics), Ryo Mabuchi (Melbourne and Rome Olympics), Toshio Yamano (Rome and Tokyo Olympics), Shunsuke Kaneto (Rome and Tokyo Olympics), Keiko Osaki（Otsubo) (Tokyo, Mexico and Munich Olympics), Yoshinori Nishide (Montreal Olympics).In particular, during a time when women’s sports were not common practice, training Masami Miyamoto up to the Olympic level in a Kanazawa where feudal customs remained strong is a testament to Mr. Nakata’s skill and fervor in coaching.To make up for the disadvantage of snow, he came up with the ancestor of spotting using belts, ropes and pulleys from track equipment so that athletes could experience and learn sensations midair, and he also was the first to incorporate trampoline to the diving training regimen. He spent his life training many athletes and, turned to junior training in his later years. He was awarded The Order of the Sacred Treasure, Gold and Silver Rays in 1982, and continued to train divers on the poolside until he was 93, making him the oldest coach in activity. He never lost his passion for diving until he passed away at 99 years old. It is not too much to say that his pupils and their pupils in turn are now contributing to the Japanese diving world. 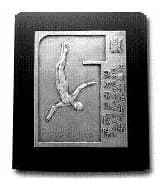 On September 21st, 2019, the 95th Japan National Championships’ Diving competition was held at the Kanazawa Pool. In this competition of the highest level, the men’s 3 m diving category was named after Shuzo Nakata’s first pupil, Tsuneo Shibahara, with its own “Shibahara Cup” plaque offered to the winner.

Tsuneo Shibahara
Born in Kanazawa. Trained by Shuzo Nakata, he enrolled in Nihon University, before taking part in the 1936 Berlin Olympics, where he was 6th in high diving, and 4th in the 3m springboard competition, making him the first Japanese to have scored high points in the diving world. After the war, he taught younger generations while he also was, as the Chairman for Diving for the Japanese Swimming Federation, coach for the Rome Olympics, as well as involved in the success of the Tokyo Olympics.

The Kaga Domain and Kyūdō

The Kaga Domain and Go